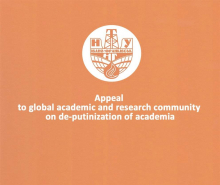 For many years the scholars from Russia have benefited from various international research and internship grant programs provided by the Western democracies. Sadly, «return on investment» was used to strengthen and solidify Putin’s anti-democratic regime. Consummation of financial means without appropriation of the civic values and virtues is a manifestly unambiguous sign of the Russian academic community’s complicity with the regime. For example, the Russian rector council supported the war against Ukraine, collecting hundreds of signatures.

The shocking support or silence of a vast majority of the scholars in Russia in view of the Russian invasion in Ukraine and the war crimes committed by the Russian army cannot be justified by any human and ethical standards. To support or to keep silent in view of atrocities and suffering inflicted by the Russian Government on the innocent civilian population of Ukraine makes Russian academia equally responsible for the crimes against humanity. Sadly, the Belarusian scholars also remain silent observers of Russia’s crimes against humanity in Ukraine. Their support of the actions of the Lukashenko regime as well as silent contemplation of the Russian invasion is also a crime.

So here is our Appeal to the global academic and research community on de-putinization of academia with clear proposals.

We understand that these measures are strict, but today is not the time for half-measures. The world ignored the Russian invasion of Georgia in 2008; the world did not react adequately in 2014 when Russia occupied Crimea and parts of Donetsk and Luhansk districts. The world shouldn’t repeat the same mistake over and over again. Impunity encourages new violations. In the famous words, “the only thing necessary for the triumph of evil is for good men to do nothing”. We are deeply grateful for those brave Russian and Belorussian scholars, who publicly condemn Putin’s regime. Therefore, we propose these restrictions should not apply to individuals and institutions that have a proven record of public condemnation of the Russia’s armed aggression against Ukraine.

This appeal has already been signed by over 8000 Ukrainian and Western academics, including:

You can see the full list of signatories here.

This appeal was already published in the form of letter in journal Nature –  and will be published in other Western educational periodicals too.

Your personal signature and solidarity will help restore confidence in the mission of higher education and science – preparing for life as active citizens in democratic societies!

Thank you for your active stance instead of remaining a silent observer!