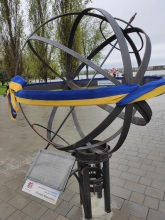 A sundial, such an innovative gift, the city received on its 359th birthday from its talented residents. The sundial, which is the decoration of many European capitals and cities of Ukraine (Vienna, Warsaw, Kyiv, Kherson, Zbarazh, Lviv, Chernivtsi, etc.), thanks to the collective work of scientists, workers, students of Ivano-Frankivsk National Technical University of Oil and Gas, Technical High School № 21, Professional Construction Lyceum and Centre for Educational Innovations funded by the Ivano-Frankivsk City Council will not only decorate Ivano-Frankivsk, but also allow everyone to check the time on it from sunrise to sunset, according to the Latin inscription on the clock: "A solis ortu usque ad occasum".

The idea on a sundial came out in the walls of IFNTUOG. Denys Kukhtar, a young scientist, assistant professor of the Department of Geodesy and Land Management of the Institute of Architecture, Construction and Power Engineering, was impressed by ancient sundials in various cities of Ukraine. But he understood that the idea needs support to be realized. Maksym Karpash, vice-rector for International Affairs and students in specialty “Geodesy and Land Mamagement”, among which Vladyslav Kerker (ГЗ-18-1) especially distinguished himself, joined the project. 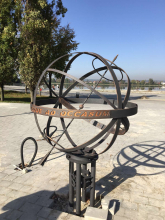 Grand opening of the Sundial was held in the presence of the representatives of the city administration, headed by the Mayor, Ruslan Martsinkiv, the Director of the Department of Education of Ivano-Frankivsk City Council, Igor Maksymchuk, the Rector of IFNTUOG, Yevstahii Kryzhanivskyi, the First Vice-Rector, Oleh Mandryk, the Vice-Rectors of IFNTUOG, Maksym Karpash and Serhii Kurovets, the Associate Professor of the Department of Geodesy and Land Management, Denys Kukhtar, the Director of Technical High School № 21, Mykhailo Babiak, the Director of Professional Construction Lyceum, Olha Huzar and a master of industrial training, Volodymyr Vivcharuk without the organization, support and assistance of which the project could not take place.

The Mayor, Ruslan Martsinkiv and the Rector of IFNTUOG, Yevstahii Kryzhanivskyi, who later had the honor of cutting the ribbon, addressed the audience with welcome speech.