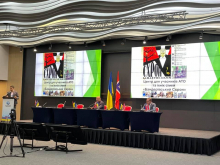 Ivano-Frankivsk National Technical University of Oil and Gas joined the International Conference “International Cooperation in Solving the Problem of Social and Professional Adaptation of Military Personnel, Veterans and Their Family Members in Ukraine” dedicated to discussing the reintegration of veterans, the military career transition, enhancing the competitiveness of Ukrainian defenders in the labor market, promoting entrepreneurial initiatives of veterans, psychological support of Ukrainian defenders, their families and survivors.

The event is organized by the Ministry of Veterans Affairs of Ukraine and the International Foundation for Social Adaptation with the financial support of the Norwegian Ministry of Foreign Affairs.

Opening the conference, Ambassador Extraordinary and Plenipotentiary of the Kingdom of Norway in Ukraine Erik Swedal has noted that the Norway-Ukraine project, which is currently being implemented in our country, shows real successful outcomes. Thanks to a unique personalized approach, training with family members, most participants of the Norway-Ukraine project have successfully adapted to the conditions of civilian life, created their own family business, or used the acquired professional skills for employment.

For six years, free courses at our university have been helping Ukrainian soldiers to find their place in civilian life after the war. These courses are part of the project "Norway-Ukraine. Professional adaptation. Integration into the state system", which has been implemented at IFNTUOG since 2015 and funded by the Norwegian Ministry of Foreign Affairs. In total, more than ten universities are involved in the project, in Ivano-Frankivsk - only our university. 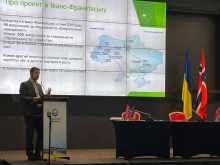 The coordinator of the project «Norway-Ukraine. Professional Adaptation. Integration into the state system» in Ivano-Frankivsk, vice-rector of IFNTUOG Maksym Karpash participated in the conference.

In general, the conference participants had the opportunity to share their experience in the social and professional adaptation of Ukrainian defenders into civilian life, discuss the creation of tools to maximize the employment of veterans, create all conditions to make the military career transition for veterans as effective as possible.