IFNTUOG Ph.D. student presented his researches at the energy seminar in Algeria 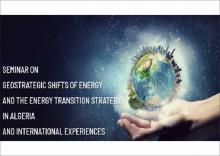 On March 13, the citizen of Algeria, Hatem Ghandir, executive producer of one of the world's most famous TV channels - AlJazeera, who is gaining a degree (speciality 051 “Economics”, a graduate student of the Department of Applied Economics) at the Ivano-Frankivsk National Technical University of Oil and Gas participated in the International Seminar “Geostrategic Shifts of Energy and the Energy Transition Strategy in Algeria and International Experiences”, representing IFNTUOG (Ukraine).

The participants of the seminar aimed to find ways to solve energy and economic problems in accordance with the current situation.The changes on the map of world energy regions, demand rate of energy source materials, new production areas and new technologies, the expansion of consumer markets, which intensified business competition were analyzed. Algerian scientists emphasized that such a situation has complicated the energy competitiveness of the Algerian economy and led to a partial loss of its investment opportunities at various levels.

Among the main factors that caused the crisis, on the one part are the countries which because of their excess amount of energy resources and price wars tried to prevail at the energy market, on the other part – coronavirus pandemic, which created a stagnation in economic activity, and therefore significant reduction of demand for traditional and non-traditional energy, as a result this led to extreme down in energy consumption by industry, economic and energy companies, in particular. These negative effects also effected on the Algerian economy. 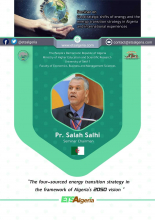 A number of issues were discussed at the seminar:

1. Determination of geostrategic shifts in energy and its consequences for the energy competitiveness of the Algerian economy.

4. Presentation of the basics of energy transformation and vectors of triple energy transition strategy (traditional, non-conventional and renewable energy). 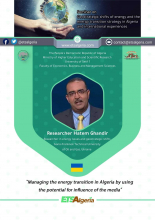 The seminar included discussions with graduate students in the field of international economics, economic analysis and international trade, and with people who are interested in energy economics, which allows them to monitor the transformations associated with traditional, non-conventional and renewable energy sources, to analyze experiences, policies and strategies related to energy transmission. Hatem Ghandir is among such scientists. He analyzes geostrategic transformations associated with traditional and renewable energy sources in his researches in the field of energy geostrategic transformations. According to scientist’s opinion, changes in this area accelerated yet more and effected the competitiveness of countries, which caused new challenges for many countries and certain risks for economies.